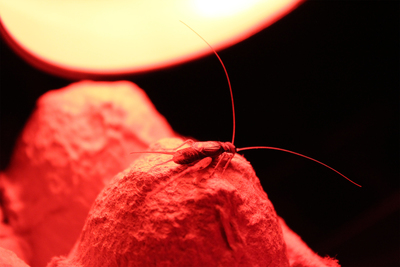 Although we think of sexual reproduction as inherently cooperative, it is frequently beset with conflicts of interests between the sexes. Conflict surrounds mating and the paternity of offspring: males gain by monopolizing fertilization of a female’s eggs, while females benefit by pursuing matings with other males. I investigate this conflict of the sexes in the decorated cricket, Gryllodes sigillatus; a male of this species is pictured here. My research focuses on how males manipulate females during reproduction via chemical compounds in their ejaculates, which I do by sitting in red-lit dark room and watching crickets have sex. We are not certain of the exact mechanism by which males manipulate females, but we now have reason to believe that male-derived proteins transferred at mating may be responsible. My research aims to determine the role of these proteins in manipulating female behavior and physiology, specifically female sexual receptivity and egg-laying behavior. As the mechanism underlying the female behavioral change has not been established, my work aims to take a novel functional genomics approach to deconstruct the molecular underpinnings at the heart of this sexual conflict in these crickets.