Welcoming in the Front Door 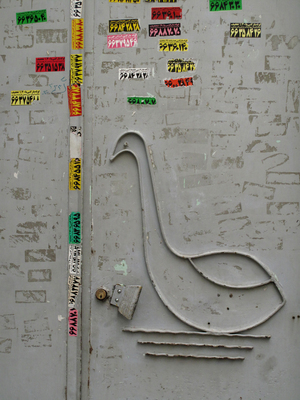 I am studying about a style of doors in my home country, Iran. They were common when I was a child. I have been taking pictures of them in the old neighborhoods in different cities during my travels since 2014. Recently, I have focused on making paintings of them in my studio practice.

I believe you can focus on the house, its structure and its elements to think and talk about the residents, family. The doors are interesting as a barrier between two different realms. They are the gates between intimate people and others. They are mysterious, closed and blocking. We can just stop by the door, look at it and imagine. I want to invite the audience to think about what is going on behind these doors. It could be something between a happy life and a disaster. The irony that they have fragile elements like flowers and animals out of metal on them is also appealing to me. Also, we can consider the surface of the doors as the third realm. Considering stranger people who put the sticker on the doors and went. Stickers that are not wanted and were tried to be removed.