For Whom Does the Male Bird Sing 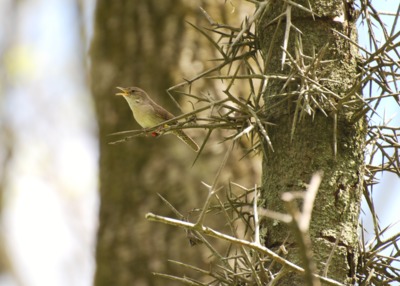 Here, a male house wren (Troglodytes aedon) sings with gusto on a honey locust tree (Gleditsia triacanthos) near his nestbox in the Merwin Nature Preserve near Lexington, IL. It is widely understood that male bird song is an honest signal of vigor to other males in competition for territory and mates, and of quality to females for mating. Yet, in many species, it is unknown which particular components of song elicit the most intense competition in males or are most attractive to females. The house wren is one such species. Male house wrens, like the one pictured here, sing highly varied, multi-component songs that appear to be important in male competition and female choice, but the specific song components that promote success in these contexts remain unknown. My research focuses on identifying what role different male song components play in male competition and female choice, to better understand how sexual selection (a mechanism of evolution) has directly and indirectly shaped this elaborate trait. This image is reflective of the unknowns I face in my work—we see that the male sings, but we do not yet know how that song, or the particular components therein, relate to his mating success.